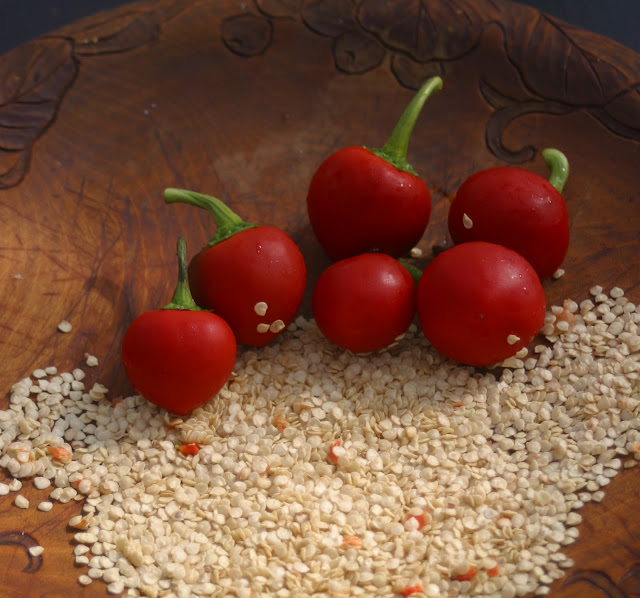 First 10 people to write me, call me, facebook me with their addresses gets some seeds from my Cherry Bomb pepper plants. Sweet and hot - the perfect pizza pepper!  For your harvest next year!  Each 1-3 seed(s) will yield a little pepper plant for starting in your hot house, your balcony, your garden next year.  Each packet has approximately 20-30 seeds maybe more. These will keep at least through the next season if kept nice and dry. 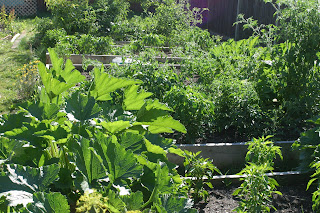 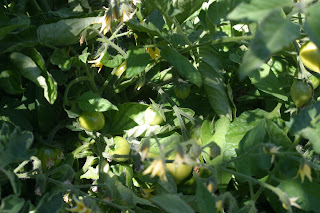 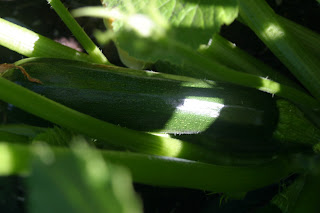 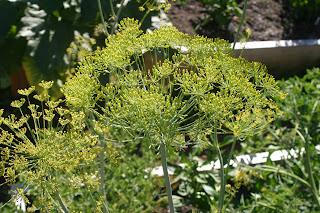 After the lucky 10, the rest of the seeds I've baggied will go to seed libraries here in Portland, OR. Hoping all share their bounty.
2 comments 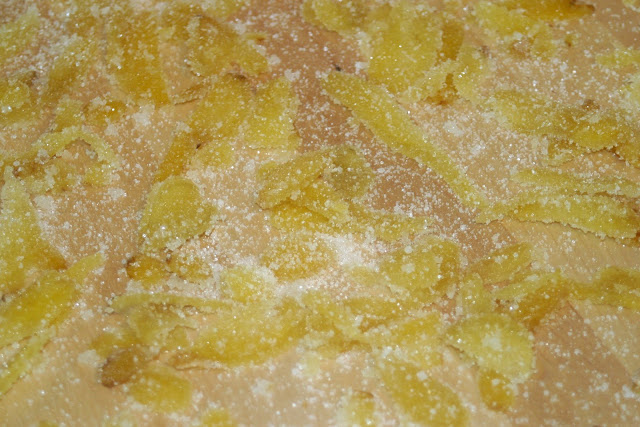 I post a lot of things that use a lot of sugar.  I effing love sugar.  Because it is delicious, but also because people love it.  For as much as people want to be healthy, they really just want to bathe in sugar.  Which is probably the best way to use sugar since it's got some mean scrubbing power.

So here is a good use for that sugar which isn't bathing so much in it as it is getting a dose of it.

I way over purchased the ginger since I'd never made ginger anything really.  I'd had it grated over things but that was about it.

So I used a spoon turn bowl side down to peel the ginger.  A spoon will get into most nooks and crannies of ginger root.  If there is a little skin left on, no one will care much.

Spoon scrape ginger clean and then slice it thinly.  Save peel for adding to water once ginger slices are removed. Bring water to boil and add ginger - add 1/2 Cup sugar to water and boil until a piece of ginger can be gnawed without too much effort but with plenty of firmness to be candy later. Take out large ginger pieces straining them over the pot and moving to a colander so they can be sugared liberally and then shaken of loose sugar.  Add to the water your skins and boil. The water will start to turn darker.  Strain skins and add other 1/2 Cup sugar to the syrup/water.  Check ginger in colander, it may need a new shake and a new coating of sugar.  Place onto a clean flat surface after shaking colander.  Spread Ginger pieces out and sprinkle with sugar again if needed. Allow to dry.  Ginger should firm up and can be placed into containers later for gifting*.  Back to your syrup add all remaining sugar from the sprinkle sessions and check syrup for sweetness and viscosity by allowing to cool once all sugar is dissolved and dipping a spoon in the still warm mixture.  It should coat the spoon but give up freely like warm honey and run into the pot from the spoon like a thin mouse's tail.

Your yield should be very amber and potent.  For soda -Ginger Ale- I like to make a slurry with a tiny amount of carbonated water and the ginger syrup and then pour the rest of the carbonated water into the slurry mix, this way you wont lose a lot of carbonation mixing the two together.

*I usually gift them before they've hardened but beware that moisture will collect in the container from the ginger.  You have leave them to air dry indefinitely and once dry package them.  I like mine both soft and new and crisp and "aged." 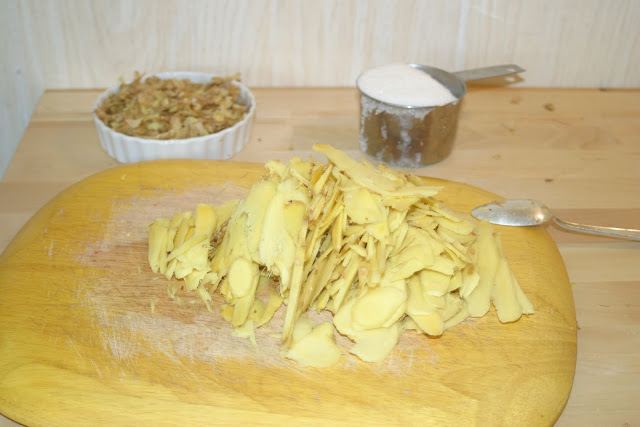 The cut and peeled ginger, with a cup of sugar.  The peeled parts will be stewed in water until it becomes syrupy.  The sliced pieces in front will be boiled,  strained and then coated in sugar. 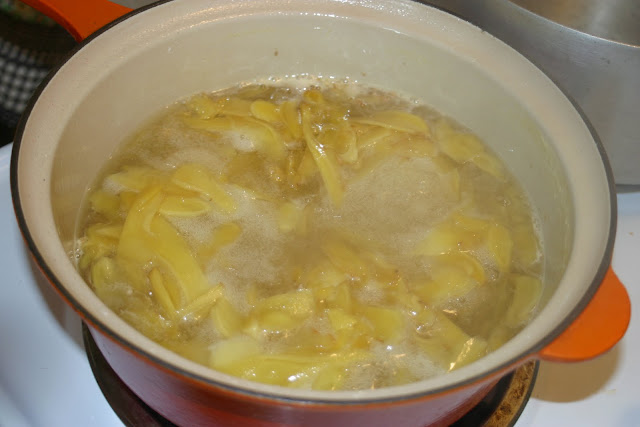 The peeled ginger slices boiling. You can see how light the water is now and watch as sugar is added and the water starts to carry a golden color from both the ginger and the sugar. 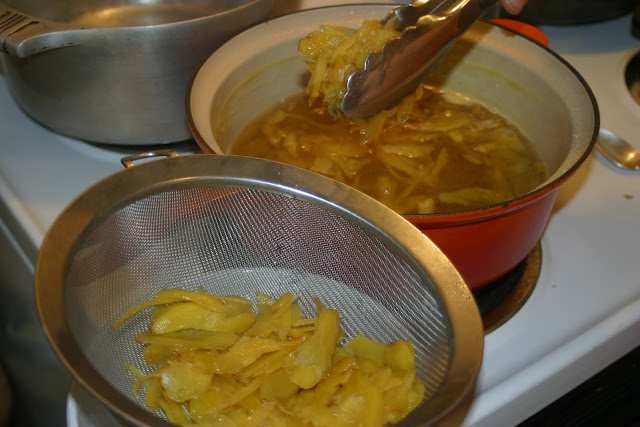 Separating the boiled ginger from the water.  This water will be the base that we add the peeled parts to in order to make a syrup. 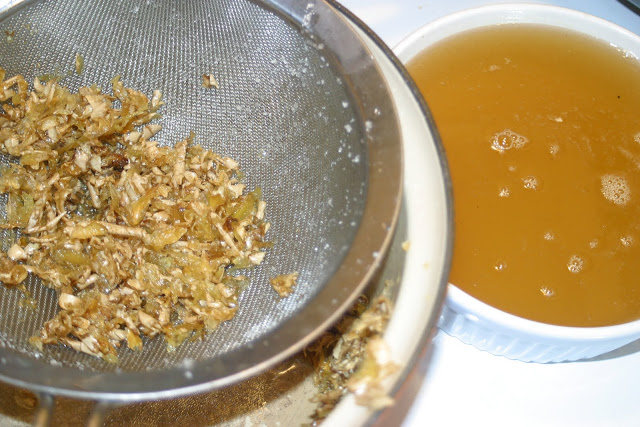 The syrup is poured through a strainer so there are no bits left.  This is what you mix with sparkling water to make the ginger ale.  Once the syrup can have a spoon dipped into it and run off like warm honey it is strong enough.  The amount of syrup that you use in each drink is the kicker.  You can keep the syrup in your refrigerator for a very long time due to the high amount of sugar it contains. 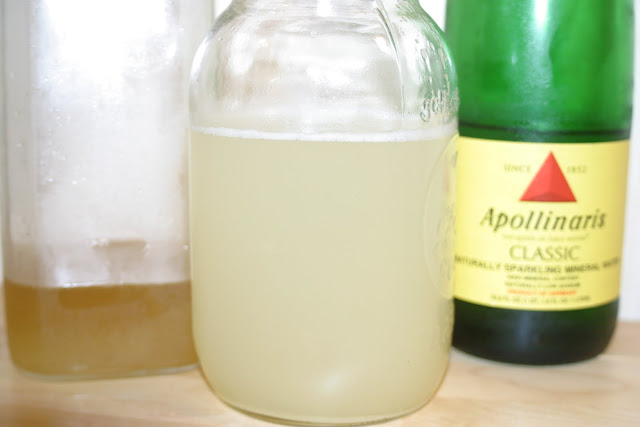 The real deal! It will be a bizarre gray/yellow/green when mixed.  Like fog.  Best of all ?  No "NATURAL FLAVORS."
2 comments

If you thought I abandoned you...

I have not.  Potlicker has made since it's birth about 15 cents.  For hours of writing, researching, preparing and photography - which I let Jason do most of the time because I am not a photographer.  That is changing a little bit there simply aren't enough hours in the day to potlicker day and night and not pay the bills.

In the time I have not been here I have been doing things that pay a little bit of rent, gardening, playing with chickens, canning tomatoes, and eating all the things I've already posted on here.  For the everyday cook... I have my favorites and refer to them constantly.

I am working on several dozen entries which just need photos, editing, tweaking.  I'm here, and I know you're out there even though not many of you speak directly to me becase analytics tells me several hundreds of you out there come to see what is here.  Drop a line by.  I'm friendly-enough.  Questions?  Ask away.

I often find people will look at a recipe and say "but I don't like egg on a pizza"... to which I'd say make the pizza and insert your favorite thing as a topping.  This site is purely to get folks doing.  I'm just trailer trash with caviar taste.  There is zero magic.

Hungry right now?  Type something into the search  "whole wheat"  or "vegetarian" or "cheese."  It's like a recipe box.  Always here for a flip through.

I'm happy to put my recipes up for everyone.  Once you can make 1 kind of muffin, you then have the basics for any kind your heart desires.

I think my audience is a brilliant one and I love sharing with you.
0 comments