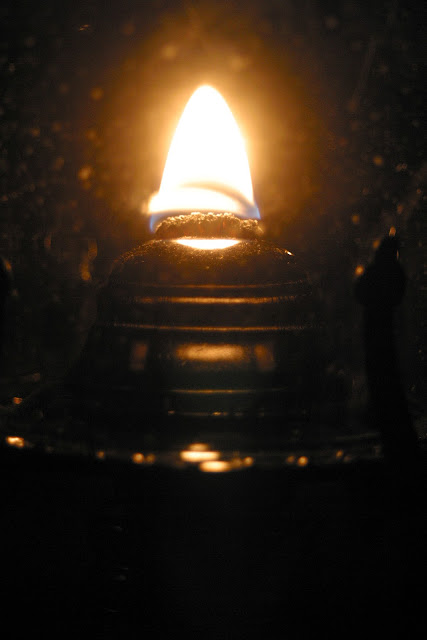 I grew up poor as can be.  Of course as kids we had zero clue and played and carried on like animals.  We knew our clothes were ugly but we were ugly too - so no one was looking.  We had a few strong rituals that made for powerful memories.  When the power would go out we would become a family.  We were of course a family already, but primarily my sister and I ran around outside and played in junk yard heaps.  When there was a power outage mom would get the oil lamps and light their woven wicks and do up the largest room in the warm amber glow.  There we'd sit and talk, really talk.  Joke with each other, about how much we hated each other - or at least it was a joke then.  We duke out some epic games of Skip-Bo and then after laughter and love.  The lights would pop back on.  Whelp, done.  Everyone go back to pretending we are all alone in life.

Recently in my neighborhood there was a power outage.  Everyone gathered on their porches looking up and down the streets.  Each shouting to the house across about what the hell was wrong with the power company and how awful the service was ( The power has flickered MAYBE twice in the year I've lived here- no complaints from me).  Jason and I gathered candles and ran to the porch elated. Watching the neighbors talk at length, giggle together and children frolicking hard like summer fawns.  It was incredible.  Everyone had a candle flame either on their porches or in their living rooms.  You could see every star.  There was a harmony in the neighborhood that was rivaled only by the saccharine joy of woodland creatures in a Disney feature.

At 10 PM on the dot the power kicked back on and a roar of clapping and hollering thundered throughout the neighborhood.  In an instant every one was "happy" after being so happy.  Now they could go back into their caves and turn on their cave-shadows.  No need to be friendly.  We're good, we have Netflix.  New episode of House on Hulu.  Now we could be really happy because we could escape how sad we are and not feel anything at all.   With the clapping my spirit melted and I sat on the porch with Jason until it became a little uncomfortably cold.