Pumpkin Ice Cream - It is never too cold for delicious


I'm not a gadget person.  I have a small electric hand mixer that comes out maybe 4 times a year even though I cook about 800 times a year.  I fail at knowing anything new and usually sit with a puzzled look when folks talk about such toys.  I'm the one who always thinks "WHY DOES ANYONE NEED THAT!?" (yes, sometimes in appalled anger) A mixer, sppfff, a spoon - I have 4 and they are easy to clean.  Well, I fell for the marketing trap of the Play and Freeze.  I wanted it and longed for it.  I called every store in the 15 mile area around me.  I pined for it but couldn't spend 30 or more dollars to order it.  Not finding it anywhere I gave up and shrugged off my "need" for it.  Jason kept insisting we could make ice cream with "just a can and a bowl"  but the initiative was never taken to make it.  UNTIL NOW!!! Yeah!

What you need for 1 quart (breaking it up into two batches cuts the time on it and it will keep in the fridge for a week easily):

The more fat there is in the milk, the quicker it will fluff and freeze, but I don't use anything fattier than half and half because it works really well in the play and freeze for traditional method (shown in photos) fattier cream could cut back active time.  **If you mix everything except the cream into the pumpkin (spices)  then put into the freezer for a few minutes taking it out only to stir and set up the rest of your situation, then it being cold will jump start the whole thing.  If you're making the vegan version I would recommend cutting back on any strong spices just a touch as this is a potent mix meant for flavoring the cream as well.  When storing it you may want to turn your freezer down a touch so it isn't so cold.  High settings on freezers just make ice cream into concrete. For vegan version you can stick it into the fridge and just come back to it later... taking it out of the freezer placing it on the counter for a few minutes to loosen the edges from your container.  Voila!  If you want a fluffy version continue below ignoring the cream. 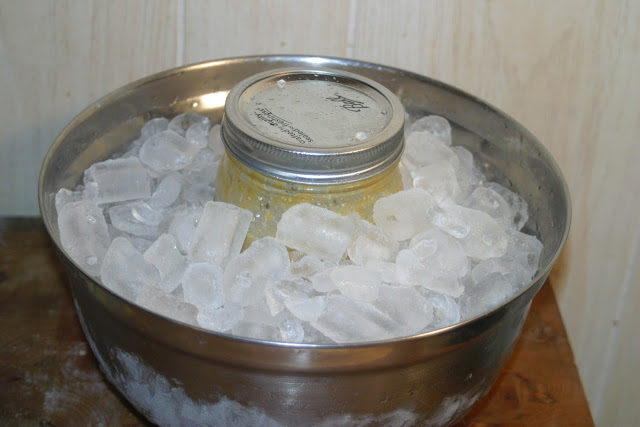 Traditional method:
In a mixing bowl whip together your sugar, spices, cream and pumpkin then pour/scoop into the can or jar.  (or place in freezer to chill first) The bowl must be large enough to house the ice and the coffee can/jar.  Can/jar goes into the center of the bowl.  Surround the can with ice. Sprinkle 1/4 Cup rock salt over ice. Reserving some salt for next ice batch should your ice diminish before you have the consistency of ice cream you want. Now with the can/jar in the middle of the ice just agitate it like a washing machine.  Swishing back and forth or turning it in your desire direction mix it up.  Doesn't matter as long as it is moving and touching the ice. Ice level should be above the level of ingredients in the jar.

If you have the play and freeze just follow directions they include.  ( It is a pain in the poot to get ice cream OUT of it if you don't stop to stir it - you must stop a few times and stir it to remove the coldest from the walls) It will take about 20 minutes of active rolling to complete ice cream using half and half in the play and freeze.  It makes a fairly firm ice cream.


For the bowl method, you will also need to occasionally stir it with a spoon.  The walls will get the coldest first... so it can create an ice wall making it tough to mix in.  So stir pulling ice cream from the walls to the center and check for the consistency you want.  Once you have that... you have ice cream!
Depending on the fat in the cream and the salt in the ice this can take between 30 minutes and 55 minutes of constant motion! It makes a soft ice cream.

For saving the excess I recommend dialing down the freezer so it isn't crazy cold and turns your hardwork into concrete. To serve remove from fridge and let it sit out for a few minutes to release itself from the container.

My review of the play and freeze is that making the children do the heavy lifting portion of the ice cream making is genius.  The downside is having to stir it so often.  The quality of firmness is pretty rad as well.  Enjoy your ice cream adventures! 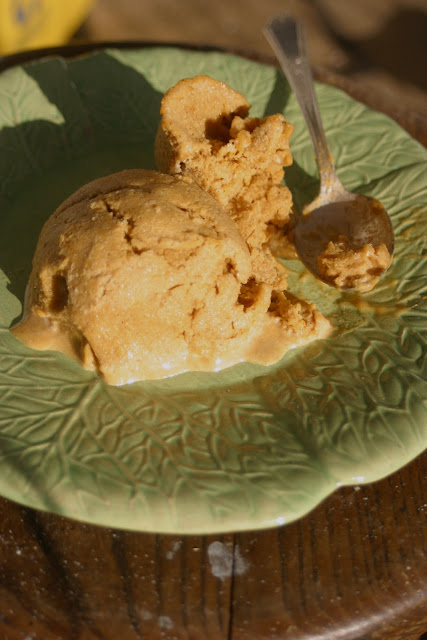